News > The Story of the Jerrycan

The iconic jerrycan has been well established into the Jeep brand, and not more so than in the new Jeep Renegade. The side panelling of the jerrycan, can be found in all parts of the bold new Jeep, from tail lights to decals. 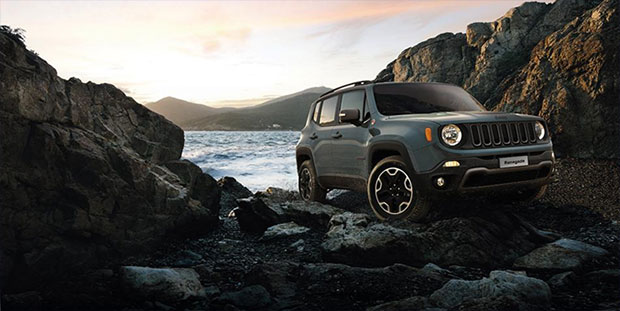 Before the outbreak of World War II, Germany that to successfully fight this war they would need better fuel containers. Most of the containers at the time had more negative criticism than positive. Problems ranged from awkward to carry shapes, inferior material and construction methods and the occasional bursting of cans left in the sun.

The Germans, excelling in exceptional innovation, engineered a fuel container to rival them all. The new fuel can weighing only 20 kilograms when full could hold 20 litres of liquid, was made entirely of two steel plates welded together in a way that minimizes weld damage and the overall design was narrow, tall and rectangular to improve packing efficiency. Each can was also stamped with a large X shape on each side to avoid bulging.

The initial idea was that these containers could be used to carry petrol and then rinsed out to carry water, however this proved to be problematic, thus water cans were simply marked with a white X shape on the sides to help differentiate.

Besides being great points to tie-down the cans, the three easy to hold steel handles were added as a way to optimize and ease the carrying of more fuel. The middle handle is used for carrying one container at a time whereas the two side handles aid two people carrying and/or carrying two cans with one hand.

To solve the dilemma with exploding cans, a hump added to the can to ensure an air pocket to allow fuel to expand. This pocket of air in the cans also made them buoyant if they happened to be full and fall into a body of water.

Once the British and the Americans caught on to how superior the containers, that were initially produced in secret by the Germans, were to theirs they started mass producing their own duplicate and dubbed them the Jerrycans after the British soldiers nickname for the Germans (“the jerrys”).

Whilst delivering a speech before the Congress, American President Roosevelt stated that these jerrycans were responsible for making it possible for the US Armies to keep going when they broke out of Normandy and move at the pace they did across France.

By the end of the second World War, it was estimated that just over 20 million jerrycans were scattered across Europe. This iconic piece of history, nearly eighty years old, is now manufactured world-wide and standard issue for several of the world's military.

For more great news and content, make sure to check our news section regularly to stay up-to-date on the world of Jeep, Fiat, Chrysler, Dodge and Alfa Romeo in Cape Town, South Africa and the world!