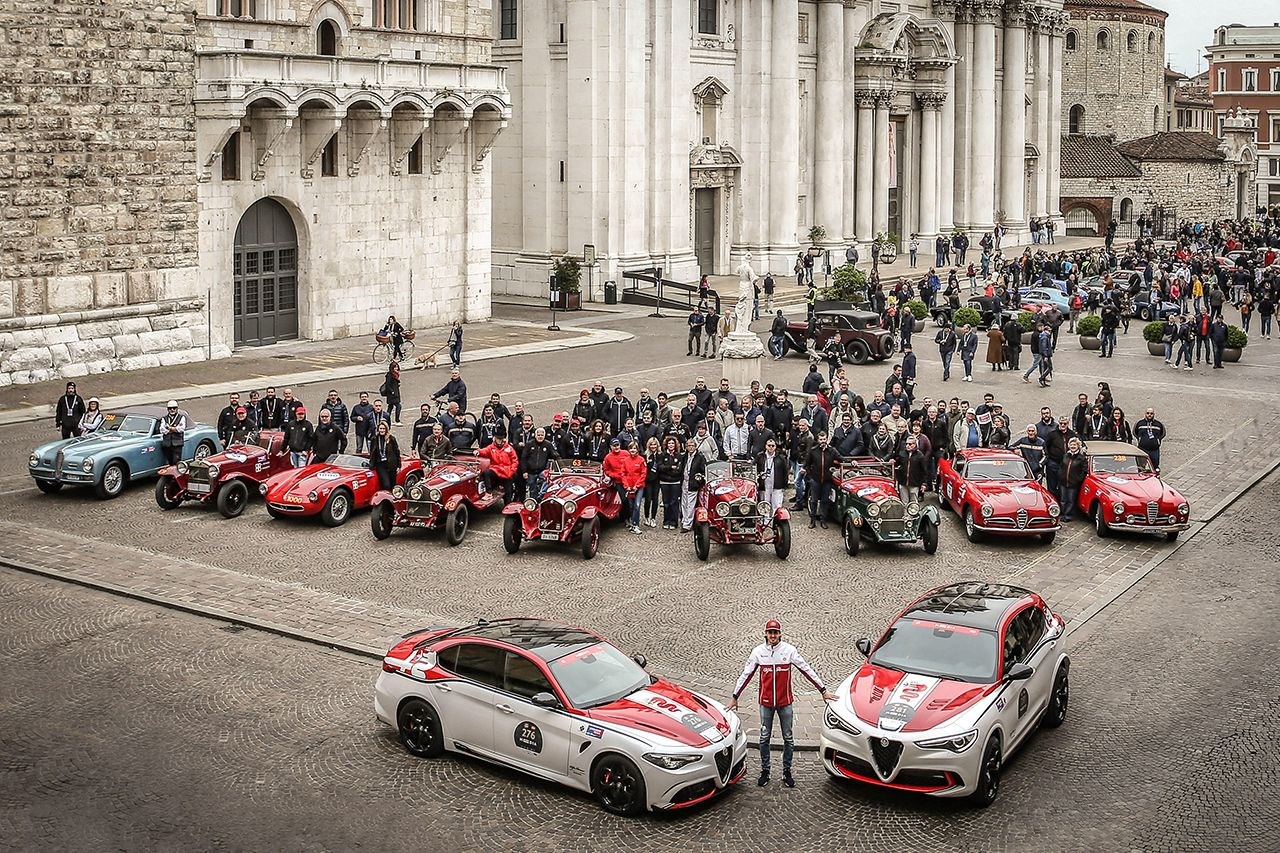 For more than ninety years, the 1000 Miglia has being the pinnacle universal appeal of motorsports, and has featured in the race that wrote the history of Alfa Romeo, with unforgettable victories and records that will stand the test of time. The brand boasts 11 wins, with 7 of them being consecutive from 1332 to 1938 and has seen all the important models leaving their mark in Brescia.

This year, Alfa Romeo, Automotive Global Partner and the constructor with the largest entries taking part is in Brescia, with cars from Museo Storico Alfa Romeo.

The Giulia and Stelvio Quadrifoglio Alfa Romeo Racing limited edition special series, in the peak of its current output, will also be showcased in its first on-road appearance in the official convoy cars.

Crowds eagerly applauded the 1928 Alfa Romeo 6C 1500 SS with the number 59, being driven by Giovanni Moceri and navigated by Daniele Bonetti. The pair came second in 2018 and are aiming to build on this after they were just 8 penalty points behind the Alfa Romeo 6C 1500 GS Testa Fissa, which took home first place in last year’s re-enactment. The Alfa Romeo 1900 Super Sprint with number 237 completes the trio of cars, driven by Prisca Taruffi and Savina Confaloni who are also in competition for the Ladies’ Cup.

Cars from the past and presents are loved by fans

The roaring of the cars heading South East to Desenzano could be heard all along the race route to Milano Marittima, despite already being delighted by spectators and participants the previous day. The fairgrounds that were always used a place for teams from all over the world to gather, was transformed into a place where old friends came together to look back on past events and editions, before showing the crowds at Piazza della Vittoria in the morning.

There are two stages at the event, one for crews – permits, certificates, and driving licenses – and another where the technical features are checked. A lead seal confirms that the inspection has been performed and passed, and the car is as specified in the race documents. But above all, it is the first time where fans can take a closer look at the legendary cars of the past.

Antonio Giovinazzi on board the Giulia Quadrifoglio

The event is also an opportunity for fans to experience both the historic cars as well as the more modern models in the official Alfa Romeo convoy.  Antonio Giovinazzi was welcomed by delighted fans who was driving the Alfa Romeo Racing limited edition special series Giulia. The model embodies both Giulia and Stelvio Quadrifoglio and embraces how Alfa Romeo is deepening their partnerships with Formula 1, together with Sauber.

The paintwork on these models pay tribute to the Alfa Romeo Racing C38 with distinctive details. They also feature exclusive contents including the 2.9 V6 Bi-Turbo with power boosted by 20 HP thanks to additional tuning by the Alfa Romeo engineers and the Akrapović titanium exhaust. The model also has a braking system with carbon-ceramic brakes and carbon shell seats by Sparco. These deliver a reduction in weight compared to standard production trims.