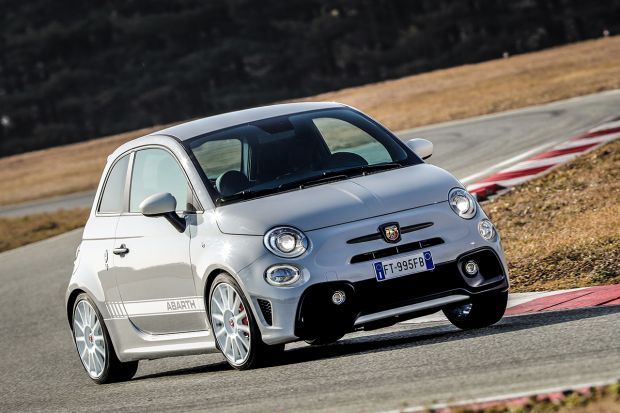 The Scorpion brand celebrated the 70th anniversary of its foundation at the Geneva International Motor Show, a milestone for motorsports history. The new Abarth 595 esseesse and the Abarth 124 Rally Tribute limited-edition are the stars of the show, expressing the brand’s racing soul and victorious past in motorsports.

The first car is a homage to the Sixties tuning kit, which was successfully brought to life again in 2009 in the new Abarth 500. The second debut car is a tribute to the Abarth 214 rally, that had an exceptionally successful season with a victory in the FIA R-GT Cup and the European Rally Championship, as well as more than 40 class victories in 12 different national championships. The 2019 goal is to defend its dominant position and the titles that have been won.

With a new life breathed into a name with deep roots in the brand’s history, the new Abarth 595 esseesse is back, and looking right into its origins, to a time when the Sixties tuning kits made Karl Abarth’s fortune. The inventor of these kits designed them to boost the performance of mass-produced cars.

The first Abarth 595 esseesse debuted in 1694 and saw the aid of a Solex 34 PBIC carburettor and a special intake manifold that was cast in a single piece of alloy with the valve cover. This managed to boost its power to 32 HP. The car was recognised on the outside by the rubber ties that secured the bonnet instead of the typical lock, replaced by the enamelled Abarth logo. The interior of this ‘mean little Scorpion’ featured displayed distinctive badges with the ‘SS’ monogram in all-caps on the bonnet and boot. Italian car enthusiasts saw it as an instant success.

This success was repeated in 2008 by the original ‘esseesse’ turning kit for the new Abarth 500, which was released in 2008. The modified suspension setup and tuning increasing the engine’s powee to 160 HP. Eibach lowered springs, added a higher-powered braking system, and other racing inspired contents to achieve this outcome. The ‘esseesse’ tuning kit was only installed by the official network of Abarth tuners, to ensure it complied with the most demanding control and safety standard. These tuned still received it in the famous wooden crate, just like the Sixties original

Ten years later, the iconic ‘esseesse’ has made a comeback at the top of the Abarth range. Equipped with the brand’s most powerful engine, the 180 HP, the model is aimed for lovers of sheer performance. The new Abarth 595 takes the adrenaline and sportiness of the brand, and combines it with design, style and connectivity characteristics.

To provide an exciting driving experience, and in true Abarth tradition, the car is made by specific standard equipment that is accompanied by the distinctive roar of the Abarth by an Akrapovic exhaust system.

The new Abarth 595 esseesse also comes with a high-performance Brembo front braking system to ensure perfect handling and exceptional responses. This is thanks to the perforated & ventilated front brake discs and oversized red brake callipers. The system is specifically able to realign the brake pads with the disc’s braking surface, which in turn produces rapid heat dispersal and improved car reactivity when applying brakes.

To improve a better intake of air flow capacity, it comes standard with an air cleaner by BMC, which is better than conventional air cleaners with benefits for engine combustion quality and power output, resulting is overall better performance. The Abarth 595 esseesse is completed by Koni FSD (Frequency Selective Damping) rear suspensions. This optimises the driving experience and aids to even better road holding, handling and stability. To really complete the car, the standard also includes navigation with the 7” Uconnect HD touchscreen system with Abarth Telemetry, Apple CarPlay and Android Auto compatibility.

This is requirement is also accompanied by aesthetic features you won’t see anywhere else. The new Abarth 595 esseesse is easily identified on the outside by the 17” Supersport alloy wheels with a new Racing White finish, Abarth side strips, mirror caps and matching front & rear DAM.

Together with the 70th anniversary logo, this new Abarth is certified by the specific ‘esseesse’ on its livery. The racing personality is really showed by the ‘Sabelt 70” sport seats with carbon rear shells as well as the carbon pedals. Besides that, a whole new range of Sabelt seats are available on the 595, just to mark the Abarth’s 70th anniversary even more with the number 70 embroidered on the cover. These seats are also further improved in their shapes, inserts and padding, and give an intense driving experience that only the Abarth 595 esseesse can give.

The global debut of the new Abarth 124 Rally Tribute is being hosted by the Geneva show to celebrate the racing car’s victories last year, not only in the FIA R-GT Cup, but also in 40 class victories in the 12 national championships it excelled in.

Living up to its name, the new Abarth 124 Rally Tribute was produced in a limited quantity of 124 cars, making it truly a collector’s item - from the commemorative badge on the mudguards to the numbered metal plaque inside the cockpit certifying its exclusive status. This car has really been transformed into an emblem of the brand’s core values: craftsmanship care, technical excellence and performance.

Derived from the 124 Spider, the new Abarth 124 Rally Tribute can thank its mechanical self-locking differential for its incredible agility and being one of only a few cars to offer this in its segment. With the weight being concentrated within the wheelbase, the car is super lightweight at just 1.060kg and guarantees exceptional agility with a weight-power ratio if 6.2kg/HP.

There’s a 1.4 litre four-cylinder turbocharged engine with MultiAir technology under the bonnet, with Euro 6/D homologation that delivers 170 HP and 250 Nm of torque to achieve a top speed of 232km/h and acceleration from 0 to 100km/h in 6.8 seconds. This phenomenal power comes paired with a 6-speed manual transmission with suspensions that feature high double wishbone suspension on the front and five-arm multi-link on the rear.

We can’t forget about the legendary Record Monza exhaust on the new Abarth 124 Rally Tribute that features a dual mode system that can modify the flow of the exhaust as to the engine rpm, ensuring linear toque delivery that produces a deep roar. There are some other technical features taken from racing inspiration includes the brakes which are developed and produced by Brembo, and the ultralight 17” alloy wheels with a Racing White finish, reducing the weight by 4kg, aiding to enhanced handler and a sportier look.

The new Abarth 124 Rally Tribute is also sporting two bodywork colours – Costa Brava Red and Turini White, and both come with a matte black bonnet as a reference to the historic Abarth 124 Rally. This was a feature produced to reduce sun daze for the driver on the original. The mirror caps and DAM come in gunmetal grey, with the same Costa Brava Red livery or Racing Red with Turini White paintwork.

There are so some luxurious comfort features that come with the standard outfit like the heated leather seats, Alcantara kit, Abarth mats, automatic climate control and a Radio Plus Pack. The pack comprises an integrated infotainment system that can be controlled by the user-friendly knob on the central tunnel. A 7-inch colour touchscreen, DAB digital tuner, two USB ports, AUX port and Bluetooth connection is also a standard feature; combined with a Bose sound system that has nine speakers (with four built into the head restraints).

Some key accessories from the Mopar catalogue is also available for the Abarth 124 spider and include a carbon fibre hard top that gives the car a coupé style while keeping the driving pleasure only a genuine roadster can give. The hard top is also incredibly lightweight, safe, and high-tech. An oversized strut bar offers torsional rigidity that produces unmatched handling. There is also a series of other accessories like a drink holder kit with silver rings and aluminium cup that has the 124 Spider logo, just to make the interior even more exclusive. The boot net with Mopar logo assists with load organisation to really bring you freedom of the road.

Based on the Fiat 1100, the 204 A was the first vehicle produced that also immediately won the 1100 Sport Italian Championship and the Formula 2 racing title. The history of the brand since its humble start has been packed with record breaking wins, racing, and has also stayed in true spirit of maximum performance, craftmanship and technical progress.

Thanks to the Abarth 124 Rally, the public is once again enjoying the thrills that were found in the mid-fifties when the brand’s motorsports legend began. The Scorpion brand and a close partnership with Fiat scooped up 10 world records, 133 international records and more than 10,000 track wins.

The list of Abarth cars that have made their spot in history is an endless one and includes everything from the record-breaking cars that were built in collaboration with Turin’s top coachbuilders in Fiat-derived models, to the 850 TC that win on all the international circuits!

Despite these victories being impressive and something that should be honoured, the core importance of racing has always been broader for Abarth’s engineers and technical experts. For one, the gruelling testing and harshest conditions they go through to try out the most innovative technologies that are just waiting to be transferred to the Abarth road cars. The brand saw its best-ever European sales in 2018, with almost 23,500 unites registered and a growth of 36.5%, compared to 2017, and the two new additions at the Geneva show should help carry this success into 2019.

The sales records for 2018 didn’t stop in Europe though, with the brand seeing Great Britain set its national unit with 5,600 units sold and a growth increase of 27%, and Spain sold 1,450 units, showing a growth of 27%. The brand is also seeing its European fanbase growing insanely fast with more than 100,00 fans registered to the Abarth Scorpionship Comminity. All of this contributed to the brand launching the 70th anniversarty range which includes the Abarth 595, Abarth 124 and the Abarth 595 esseesse models. All these models can easily be identified with the logo on the outside that makes them exclusive.

The 2019 Geneva International Motor Show organisers have also created a special area at the event to add to the 70th anniversary celebrations where visitors can admire an exhibition with a collection of premium classic cars, telling the Abarth story from the early days. With 14 records for speed and endurance, FCA Heritage is also presented with the Abarth 750 Record on display.