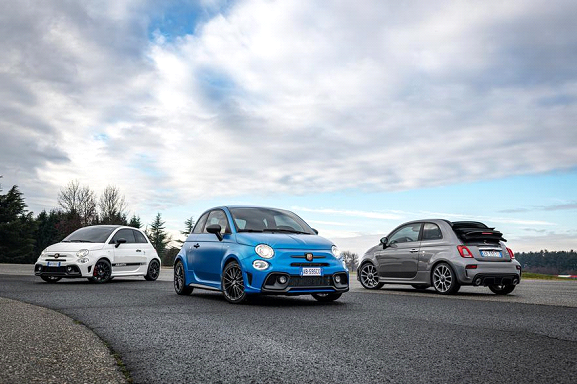 On the 31st of March 1949, Italian-Austrian engineer Carlo Abarth founded Abarth & C. Since then the brand has been known for creating fast stylish vehicles all marked with their distinctive scorpion shield, inspired by Carlo’s zodiac sign. Their motor racing prizes include 10 000 wins, 10 world records, 4 world rally championships and more.

Abarth’s founding and history are intertwined with motor racing and have always been known for lightweight vehicles that compete with much bigger competitors. Their first victory came at the 1950 Palermo-Monte Pellegrino Hillclimb where the now-famous Tazio Nuvolari grabbed a win in his Abarth 204A. In 1954 Carlo Abarth amended the Abarth logo to include a two-tone shield to represent his team’s victories in “sporting battles”.

By 1962 Abarth began their 6 times winning streak in the Manufacturers World Championships in the Abarth 1000 Bialbero which prompted a further evolution of the Abarth badge, this time adding a black & white checkered flag, laurel wreath and the words ‘Campione del mondo” which translates to World Champion.

In 1971 Abarth was bought by Fiat and to mark this the Italian flag was added to the Abarth logo as well. The logo we see on today’s modern Abarth’s comes from a redesign in 2007 which took all the distinctive elements from the original logo and reintegrated them into a more modern design.

All modern Abarth’s also have an additional logo on the rear end side panels, this is the typical yellow and red Abarth shield surrounding the scorpion with the addition of a thunderbolt in the colours of the Italian flag, it serves as another tribute to Abarth’s racing history and commitment to integrating their technical achievements into their road cars.

Abarth’s racing efforts continue on track and gravel today. Abarth serves as the engine supplier of the Italian and German F4 Championships which make use of the ubiquitous 1.4L MultiAir Turbo petrol engine seen in their road vehicles. The Abarth 124 Rally also dues duty in the European Rally Championship running in the FIA R-GT category.

For further info on our current Abarth vehicles and specials speak to our sales team.