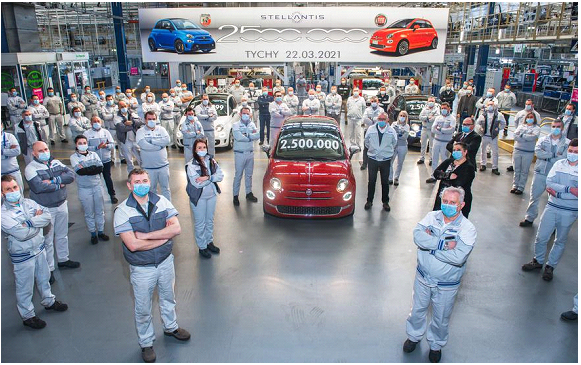 The Stellantis plant in Tychy, Poland has announced they have reached a momentous production milestone having produced 2.5 Million Fiat 500 models!

The record-breaking model was a Fiat 500 Hybrid made on order for a lucky customer in France. The hybrid 500 and Panda models have become quite popular in the European market. They along with a hybrid version of the Italian market only Lancia Ypsilon totalled 155 000 sold since their introduction in recent years.

By hitting the 2.5 million units produced of the 500 range the Tychy factory has now managed to break its previous record for most units of a range produced which was for the second-generation Fiat Panda of which is produced 2.1 million units. Production of the current 500 range started in 2007 and has been an award-winning and popular vehicle in its segments ever since then. Sold in over 100 countries all over the world its most popular markets are Italy, the UK, France, Germany, Spain, Belgium, Netherlands and Japan. Its affordability and good looks have taken it to more exotic shores such as Cayman Islands, Curaçao, Saint Martin, Senegal and Ghana.

Through Fiat’s constant work in making improvements to the 500 range over the years, it has maintained its presence in the city car segment and ended 2020 as the best-selling city car across Europe with a total market share of 17.7% for the 2nd year running. It is also one of the most awarded cars in the world has won over 60 international trophies since its launch some of which were “Car of the Year 2008”, “EuroCarBody 2007”, “Auto Europa 2008”, “World Car Design of the Year 2009”, “Golden Compass 2011” and “The Most Beautiful Car in the World”.

Since the launch of the first generation, Fiat 500 in 1957 the 500 range has sold over 6.7 million vehicles worldwide. It has evolved over each generation to adjust for different market conditions, fashion trends and has resulted in a vehicle while distinctly retro in looks its thoroughly modern and relevant to today's vehicle market. In recent years various special editions have been launched such as the fashion collaborations with Diesel, Gucci & GQ along with the iconic partnership with Riva SpA and the in-house designed 120th Anniversary edition.